Spinosaurus is without a doubt one of the most iconic and badass dinosaurs that ever roamed the planet. It’s research history, however, has been complicated to see the least. Some of the original material of this species was lost or destroyed during World War II, and newer specimens discovered since come from questionable sources without detailed information regarding where they were collected from. This makes it one of the more heavily debated dinosaur species, which is not helped by its fearsome public image! 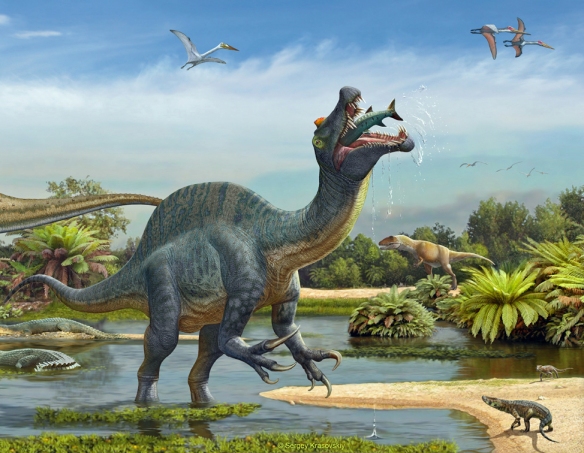 I’ve written about Spinosaurus before, and other great writers have gone into great detail about its history. A new research paper though, by Christophe Hendrickx and colleagues, reports on some new spinosaur discoveries from North Africa that help to clarify previous suspicions about specimens assigned to this beasty, as well as reveal an unusual behavioural feeding aspect of it. The new study is published in PLOS ONE (open access ftw!), and Discover Magazine were kind enough to let me write about it for them, so plenty to catch up on for dinosaur lovers!

Happy New Year everyone! It’s that time of year when all the summaries of an amazing year of research are coming out, and goodness, what a year it’s been! The folk over at Altmetric have been kind enough to summarise the top 100 articles of 2015, measured by their altmetrics scores – a measure of the social media chatter around articles. All the data are available on Figshare, and here I just wanted to highlight the palaeontology stories that stood out in the media this year according to the list.

END_OF_DOCUMENT_TOKEN_TO_BE_REPLACED

For those who haven’t seen, recently a new ‘giant raptor from Hell’ was discovered! As a cousin to the infamous Velociraptor, it represents one of the largest members of the group known as Dromaeosauridae, which were the close relatives of early birds. The new giant raptor lived alongside other beasties like T. rex and comes from the latest Cretaceous Hell Creek Formation, where it would have been a mid-tier ambush predator. It comes fully equipped with the largest ‘sickle’ claws currently known from these guys, making it one helluva lethal killing machine. Perhaps most importantly, the new species, named Dakotaraptor is the largest known ‘raptor’ that possesses unequivocal evidence of a ‘true’ wing formed from feathers. Anyway, being a greedy little grad student, I wrote about the story for Discover Magazine and also for EarthTouch, so take your pick! 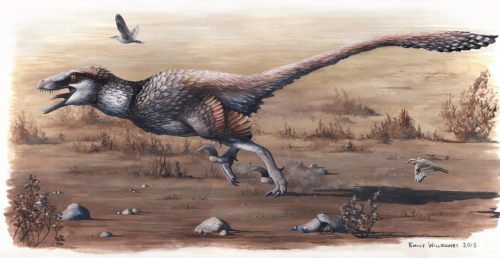 This was originally posted at: http://blogs.egu.eu/palaeoblog/?p=1250

It rises from the dark waters like some behemoth from the deep, and lets out a blood-curdling roar. It’s feeding time. One of the most iconic scenes from Jurassic Park III is where the long-snouted, sail-backed giant theropod dinosaur Spinosaurus emerges from underwater to try, yet again, to eat our beleaguered rabble of misfortunates. It’s always been the way these dinosaurs have been portrayed, including one of Spinosaurus’ close cousins Baryonyx from the UK. With their long snouts, bulbous tips, and pointy teeth, it’s often been thought that spinosaurid dinosaurs were quite a lot like modern crocodiles. But how much of this is true?

END_OF_DOCUMENT_TOKEN_TO_BE_REPLACED

This was originally posted at: http://blogs.egu.eu/palaeoblog/?p=1204

In palaeontology, there are so many things more important than dinosaurs. For example, the study of large-scale patterns in the history of life on Earth, commonly known as macroevolution, is all about uncovering patterns of speciation and extinction. We are currently about to enter the sixth mass extinction within the last 542 million years of life on Earth, so figuring out exactly what happened during periods of elevated extinction and ecosystem catastrophe is pretty damn important if we want to offset as much damage as possible.

Recently, a suite of new papers have been published giving detailed insight into the environmental and biological patterns and processes throughout the Permian-Triassic mass extinction, an event 252 million years ago that saw the demise of greater than 90% of life on this planet (numbers vary depending on which measure you use). What I’d like to offer here are bitesize summaries of each, and show that there is much more important research out there in palaeontology than just ‘woo new dinosaur’.

END_OF_DOCUMENT_TOKEN_TO_BE_REPLACED

This work is licensed under a Creative Commons Attribution 3.0 Unported License.