Seabirds are well adapted to acquire their prey. Those that feed on bivalves close to the surface have short, strong bills to break into shells and access molluscan meat, and those that feed on bivalves buried deeper in the sand have much longer, slender bills to access their prey. The association between bill morphology and the prey type of different bird species is a frequently cited example of niche differentiation, where animals living in close proximity have evolved distinct feeding strategies which prevent them from being in direct competition with each other (known as resource partitioning).

Bivalves! The ones you see here are found in sheltered, sandy environments (source).

But just as birds have the bills to suit their prey type, bivalves have the build to evade their predators. Take the common cockle (Cerastoderma edulae) for example: it has an extremely thick shell when compared to bivalves found deeper in the sediment. This thick shell is its main defence against predators, as the animal is relatively exposed when close to the surface. The only parts that protrude from its shell are the siphons, one of which is responsible for filtering plankton from the water column, and the other excretes the waste: 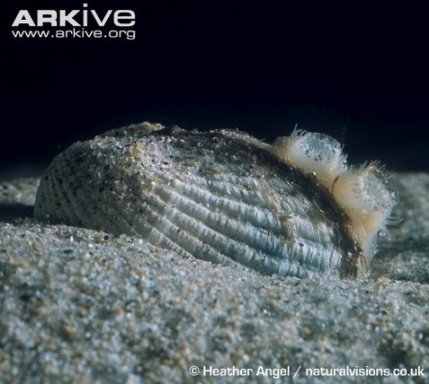 The common cockle (Cerastoderma edule) with inhalant (for feeding) and exhalant (for excreting) siphons (source).

In contrast, the razor clam (Ensis ensis) has a much thinner and longer blade-like shell. It is capable of burrowing deep in the sediment and this ability to escape from predators means it can afford to put fewer resources into developing a strong shell, instead, taking its protection from the sediment. For better access to food, razor clams shuffle up to the top of their burrow and feed on plankton close to the sediment surface. While the majority of their length remains safe and snug in the burrow, their position exposes them to a greater risk of predation. Fortunately, though, they can rapidly make their way back into the sand in case of danger…

The (relatively safe and snug) American razor clam (Ensis americanus) flanked by burrowing anemones. You can see the inhalant and exhalant siphons here too (source).

But bivalves only have one muscular foot and no other appendages at their disposal, making the idea of them rapidly shuffling to safety somewhat difficult to contemplate! Well, unless you include their shell, and it turns out that this comes in pretty handy when they need to make an emergency bid for the sandy depths!

Initially, the two valves of their shell push out against the sediment and they extend their muscular foot below them. Razor clams are able to inflate their foot with blood to form an anchor, so when they close their shell (stop pushing against the sediment), they are pulled down towards the anchor below. When it closes its shell, water enters the burrow and fluidises the sand, letting it move through the sediment much faster than if it simply forced its way in using only its foot. In fact, if the sediment were not fluidised, it would barely make it beyond a few centimetres! So effective is this burrowing mechanism, that it is now being used for industrial applications. 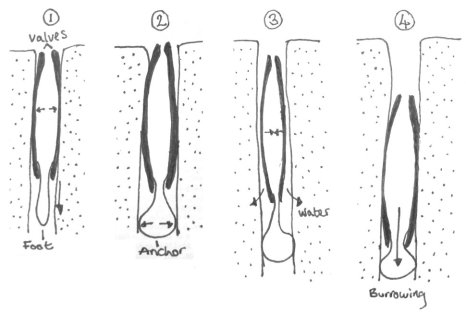 A bivalve’s guide to burrowing: (1) push valves out against the sand and extend your foot downwards, (2) inflate your foot to create an anchor, (3) close your valves to release water and create a quicksand through which you can move, and (4) contract your muscle and glide through this fluidised sediment. Repeat several times to escape any danger and you should flee successfully at a rate of ~1 cm/s.

Other bivalves that are found deep in the sediment have very thick, leathery siphons, such as the sand gaper (Mya arenaria), for example. This toughness affords them some measure of protection from hungry passers by and allows them to gain access to food without moving to the surface. They are still able to retract these siphons, but the added leathery defences come at a cost in that they are not able to fully close their shell. While this would be a disadvantage at the surface, it is not a problem for these bivalves, which stay deep within the sediment.

3 thoughts on “Shuffling to safety”